It was an image that unified separate groups into one world-wide ecology movement: the image of planet earth, photographed by the Apollo missions of the USA.

While this image was a product of military technology at the height of the cold war, it was immediately claimed by activists against the ruling “technocracy” (Theodore Roszak, The Making of a Counter Culture), in the name of a peaceful and ecological alternative to militarization and exploitation. The image of planet earth has become an icon of possibly the last utopias of the 20th century: of living in ecological harmony with nature, and of the creation of a borderless world. It transmits visions of one-ness, of wholeness, of a united world, and its popularized both ecological and systems thinking and appeared to support the idea of a post-nation state, globalized and networked society. What does the image of planet earth “want”, what operations does it perform on various ideological and affective registers? What kind of “wholeness” – ecological, systemic, spiritual, ideological – is promoted in its wake, and what is the respective relation of the parts to the whole?

This day will unfold around the implications of the “blue marble” image, the politics of ecology and the role of systems thinking in the past decades presenting research from the forthcoming exhibition The Whole Earth, co-curated by Diedrich Diederichsen and Anselm Franke, and will also discuss research from ongoing projects on Animism and the Anthropocene. Focussing on the counter-cultural movements of California in the 60s and 70s, Pop-theorist Diedrich Diederichsen will speak about concepts of wholeness and changing symptoms of the new “planetary consciousness”. Curator Anselm Franke will discuss the “Whole Earth Catalog”, a key publication of the 60s counterculture, and the relation between “animism” and the “blue marble”-inspired dream of a “cybernetic ecology” (Richard Brautigan). Media philosopher Erich Hörl will introduce the origins of the contemporary ecological paradigm, and will engage with Anselm Franke in a conversation about the fate of “negation” and “the negative” in recent history. In the afternoon, photographer and filmmaker Armin Linke will present from a recent body of collaborative work on the work of political and scientific institutions engaged with global planning in the “anthropocene”; The Otolith Group will present from an ongoing research into the spiritual- and self-help industry of California, Flora Lysen will share from her research into the brain sciences at the intersection of psychedelia and ecology, and finally Angela Melitopoulos will speak about the relation between geography and psychiatry along excerpts from her work Assemblages.

Anselm Franke (Berlin) is a curator and writer. Since 2013, he directs the Visual Art Department at the Haus der Kulturen der Welt (HKW) Berlin. He was the curator of the 2012 Taipei Biennial, which dealt with monstrosity in modern history. He curated the ongoing project Animism, which started in Antwerp and has since been developed and shown in Bern, Vienna, Berlin, New York, and Shenzen (upcoming). The Animism project investigated nature/culture relations and explored how so-called ancient animism was not only a question of the “live” of things and their status, but above all, of the culture-specific “border” separating subjects from objects, which is permanently negotiated and re-drawn.

Diedrich Diederichsen (Berlin / Wien) Critic, writer, cultural theorist and curator Diedrich Diederichsen is among Germany’s most influential theorists of pop culture. He was editor in chief of the magazine SPEX and published several books, such as the recent ON (SURPLUS) VALUE IN ART, published by Witte de WIth and Sternberg Press. He taught at the University of California and Städelschule Frankfurt, and is a professor at the Akademie der Künste in Vienna. Together with Anselm Franke, he curates the upcoming exhibition The Whole Earth.California and the Disappearance of the Outside at Haus der Kulturen der Welt Berlin.

Erich Hörl (Bochum) Erich Hörl is a philosopher and cultural theorist. He is a professor for Media Philosophy in Bochum. He wrote the book Die Heiligen Kanäle, which speaks the relation between the emerging telecommunication and media technologies in Europe and the image Europeans constructed of the mysterious communication in “primitive” cultures. Ever since, he has further explored the impact of technology on culture, in particular, he is writing on the rise of cybernetics and its relation to ecology.

Armin Linke (Berlin) Armin Linke is a photographer and filmmaker. He is a professor at the HfG ( Staatliche Hochschule fur Gestaltung)Karlsruhe. His work deals with the transformation of the environment and the so-called “great acceleration” of global technological development in the era of globalization. He initiated the research project “Imaging Technologies” on latest development in technology with students at the HfG which is currently on view as an exhibition at the ZKM (Center for Art and Media in Karlsruhe) under the title Maschinensehen. Together with Territorial Agency and Anselm Franke, Armin Linke is working on a series of films for the “Anthropocene Project” which is the larger thematic frame from 2013 to 2014 at HKW Berlin.

Flora Lysen (Amsterdam) Flora Lysen is an art historian and curator based in Amsterdam. She is currently a PhD candidate at the Institute of Culture and History at the University of Amsterdam, where she is researching models and metaphors of the brain from the mid-twentieth century to the present. Previously, she has worked as a researcher, curator and teacher at various institutions, including the Haus der Kulturen der Welt, Berlin, the Royal Academy of Art, The Hague and BAK, basis for actuele kunst, Utrecht. She has been co-editor of The Smooth and the Striated, Deleuze Studies Journal (Edingburgh University Press, 2012), with Patricia Pisters.

The Otolith Group (London) – is an artist collective founded by Anjalika Sagar and Kodwo Eshun in 2002 that integrates art practice with a distinctive public platform. The Group’s work is developed according to a shifting series of long-term research-based projects exploring the legacies and potentialities of proposals broadly informed by contemporary architecture, cosmopolitanism, speculative futures, cybernetics, and science fiction.

Angela Melitopoulos (Berlin) Angela Melitopoulos is a filmmaker, artist and writer. She frequently collaborates with writer and theorist Maurizio Lazzarato. Their visual research project Assemblages and Life of Particles was produced and shown in the exhibition series Animism from 2010 to the present day. Previously, Angela Melitopoulos produced films on the relation between migration, geography and memory such as Passing Drama (1999) and Corridor X (2006). In her work, she explores geographies of subjectivation and alternative political ecologies, often in relation to radical philosophies of psychiatry. 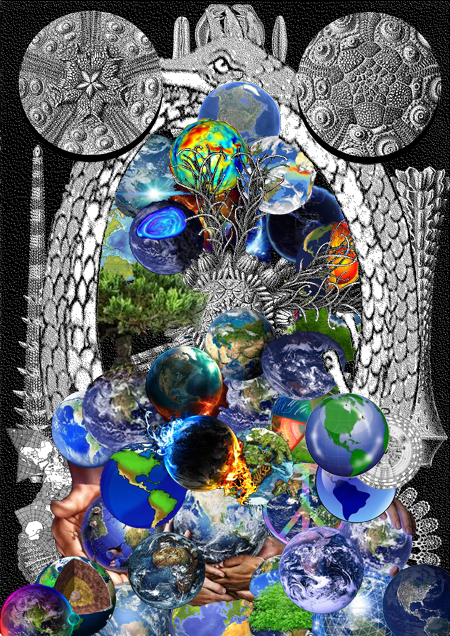